Jim Power's community planter 9-11 tribute to our Rescue Workers wins over the greed of Cooper Union the real estate magnate! 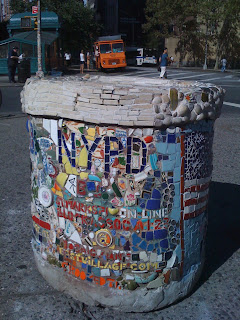 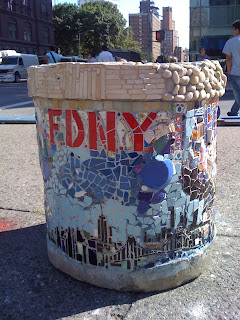 Peter Cooper's vision was to empower the poor but the school sold it's soul to be a real estate magnate and art students told me it is important The Science Building get torn down, supersized and leased for 99 years to pay for their education!   They didn't seem poor but Jim Power's made this living in the street under the harshest conditions when the rain was coming down in torrents at times living in a home made tent next to a dumpster.  At least a class of NYU students created the site www.empowerjimpower.com but John Sexton and gang have yet to supersize their contribution to the community rather than crush communities and all the universities copy NYU including Cooper Union but say they are as not as bad as NYU.
Honest Abe and Peter Cooper would have objected to the greedy community crushing treatment as Cooper Union seems almost as bad as NYU, not as bad because they don't have as much real estate yet.    I am sure the real estate magnate, Cooper Union found another place for honest Abe Lincoln and Peter Cooper since they own so much real estate but Cooper Union picked the one  spot that involved kicking an homeless artist's   9-11 community memorial planter to the curb.   Talk about lack of grace as well as greed by a "not for profit" University or rather a massive real estate magnate throwing it's weight around as usual.
Congratulations to Jim and his emotional seeing eye dog Jesse Jane (not the porn star.)  NYU, Cooper Union, The New School, SVA and New York Law (a mega dorm with balaconies on 3rd Street) have confused the East Village with "dorm-ville" and they area all using their not for profit status to transform their new focus and priority which is real estate and use their "higher education" as a tax shelter to continue buying up and leasing as much of NYC as possible.  Mean while the city has a budgetary crisis and needs to cap "not for profit" real estate magnates massive buy up a city that has seen too much red.
Seeing Jim Power's community planter back in place feels like a small win, a mini-miracle in this tsunami of community crushing development that has been a radical make over take over thanks to our billionaire mayor and mega millionaire socialite city planner.
Click on the link below to see documentation of Jim with Jesse (she is napping in the background) on the street and the community 9-11 Memorial in progress.
http://eastvillageeasteastvillage.blogspot.com/2008/08/bob-arihoods-documentation-of-jim.html
type Jim Power into my blog search engine to read early postings

Newer Post Older Post Home
URGENT 911 Tech System ECTP Criminal Investigation Needed!
NYPD Coerced me to drop charges or go to jail with a hole in my retina Saturday arrest for Dr Fagelman's savagely violent lying receptionist Delita Hooks'running punch to my eye grabbing my hair trying to drag me down the hall by my hair damaging my neck not fired or arrested I agreed to false arrest Oct 16 immediate than Det John Vergona changed my false arrest date to Saturday oct. 20, 2012 4PM IAB let him and his supervisor retire! https://www.youtube.com/watch?v=dh9TedhfthE I am alleging fix, favors and retaliation -- please look at the first page -- it mentions HP tied to 911 Tech corruption as well as mayor Bloomberg Ray Kelly free rides Air Bloomberg....http://www.scribd.com/doc/188752042/NYPD-Commissioner-Ray-Kelly-Charles-Campisi-DI-Ed-Winski-Lt-Agnes-Lt-Angelo-Burgos-IAB-Sgt-Mary-O-Donnell-Sgt-Chen-Det-Andy-Dwyer-Det-John-Ve