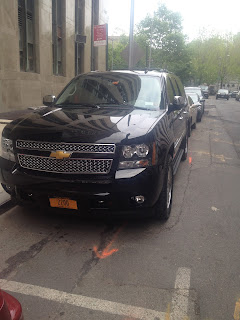 Cy Vance above the law? Like so many others who don’t belong in office I would have to say yes.

After Cy Vance has a press conference for another massive failure where a yet another NYPD Rape cop got off for vaginally and anally raping a school teacher and with the help of Lloyd Constantine a educated lawyer who acted like Pena’s defense attorney rather than a juror all but calling the school teacher a liar -- Cy Vance runs in avoiding me asking is he going to return the 5,000 grand Constantine gave him for his political campaign to be DA and will Vance resign?

Well, I ran around over the press vans and when I came back I found this black SUV illegally parked as you can see from the parking sign and also there is no parking placard. I took video and here is the photo.

Do you think Internal Affairs is going to do anything about this?