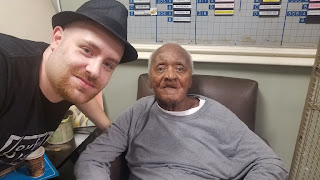 Shawneci had contacted me originally hoping to hire GL but as you can see GL is not in the best shape but from my own visit I can tell you the nursing home is very nice and they love him and take good care of him.

I am in PTSD mode from Dr Fagelman negligence office violence and he went along with the goal to have me coerced and party to gaslighting to protect his employee he did not fire so I can't visit GL anymore but I am grateful to People that do visit and give me updates like Shawneci.

When I visited GL all he wanted to do was play his instruments and most of all return to Tompkins Square Park!

Hi Suzannah i just wanted to give you an update that i visited Guiseppe in Far Rockaway today.

I think he's being well taken care of by Diane, they let him listen to jazz music and he's clean and his room is clean. he told me he hadn't played music in 7 years - i brought a saxophone for him to play - he put it to his lips but couldn't get enough air out. he said he felt to out of shape to play anything. it was sad, but we played some piano together which was nice.
it was a real emotional day for me, I felt Guiseppe was very effected too. because we're both musicians that want to play together, but because of age and health we couldn't. it made me cry on the way home, because we will probably not see each other again until we get to heaven than we can play til our hearts content.  Best wishes.

thanks yes you can publish it on the blog and my only cds out now is this one with sax player Greg Abate https://shawneci.bandcamp.com/releases
and a reggae cd i produced on the island of Jamaica https://www.amazon.com/Shawneci-presents-Lion-Hearts-EP/dp/B076J6QC1J
i just go by the name Shawneci Icecold, I'm a relatively new pianist and music producer.
i have a new Jewish music Cd coming soon called Shabbat Muzik with a clarinet player and il send you a copy when its out. thanks for your interest.

When I (Suzannah) had visited my one and only time a Canadian film documentary crew had just been there!
Again I believe because of my YouTube below.

I am too damaged from on going lies by Dr Andrew Fagelman...(please google Dr Fagelman assault YouTube and watch it and share until they stop their lies and gaslighting and Google NYPD Detective Andrew Dwyer Delita Hooks letter threatening me with a 2nd false cross complaint)

There is a powerful article from "Signal to Noise" by Pete Gershon and I thought I scanned it and posted it but I didn't and I am too traumatized right now to search for it...but it was amazing....


https://www.youtube.com/watch?v=cSb-JgMIeuA. Here is Guiseppi Logan as with his son Jaee Logan I would meet after I posted the YouTube of GL playing in the very same park almost 50 years later!  Jaee lives on the West Coast and had not seen GL since the British film documentarian had filmed them....see YouTube link at the top of this post!  YouTubeland magic and reminder all my work including the GL YouTube I filmed below was all removed when when I channel was deleted with the goal to silence me a critic of mayor Bloomberg who was running for a third term I did not support.  Luckily thanks to People like you who spoke up for me and Google deciding to do the right thing I got my YouTube channel and was able t continue my work!  The wikipedia page on my being censored and my activism has been deleted but I do exist on GL's wikipedia....

Reminder everyone I became a victim of Dr Andrew Fagelman, 155 Spring Street when his employee Delita Hooks did a running punch to my head like the came knock out the Jew... and I believe Dr Andrew Fagelman got corrupt NYPD to join in committing crimes with the goal to erases all crimes which they did and Dr Fagelman worse than Delita Hooks did not fire her but recently he came in was abusive and mocking as he committed perjury along with Delita Hooks so I have lost contact with Giuseppi Logan....  I am glad my YouTubes have gotten GL visitors!

The first visit I became aware of was a young African American man, a social worker moved by my YouTube and he visited GL when he was still living near Tompkins Square Park... I met the young man by random announcing my Justice cards in the subway and I was drawn to him because I heard him speak and with such compassion!

illing Out This Form

This form resides at https://www1.nyc.gov/office-of-the-mayor/mayor-contact.page