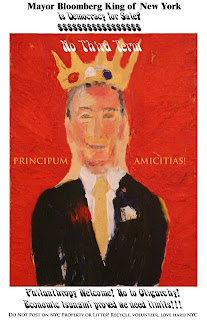 FYI: Bloomberg tech whiz biz whiz responsible along with Mark Page and his deputies for the largest White Collar Crimes EVER in NYC gov. history. Bill Thompson could have done what John Liu did and stop it but he did not -- another reason Bill Thompson must drop out of the mayoral race. I voted for Bill over Mike for mayor but both Mike and Bill were responsible for the Pensions being raided and mishandled along with CityTime and ECTP. The famous whistle blowing letter from Richard Valcich than head of OPA NYC gov had both Bloomberg and Thompson’s names on the letter. This link will take you to the letter and you can see their names on the bottom of each page!

(note: Valcich has now nothing to say -- isn’t that interesting. (CityTime SAIC and sub-contractors - cover-ups from inside NYC gov to SAIC staggering and my artistic guess is to prevent arrests of top dogs and a massive pay-out a billion to 3 billion RICO that could mean Enron ending for SAIC and the resignation of our biz whiz mayor Bloomberg perhaps?)

Bloomberg has let NYU and Columbia U as well as Cooper Union and NY Law (who built a dorm with balconies next to the hells angels on 3rd street -- when the Club House was raided the law students in the illegal zone busting build stood out in their pajamas from their balconies and watched the raid. The NYPD City of NY are now being sued by the way. Waiting to hear what the settlement on that will be.

My point is that I am pro education but not the abuse of eminent domain ex. Columbia U. and the destruction of our neighborhoods. For years I demanded that ever dorm that used the term community facility that busted through our protective zoning give us community out reach resource centers in every dorm with free computer use including for the homeless -- a table to ask for students to volunteer including tutoring kids to adult students to helping the elderly. I was told great idea John Sexton said no.

These universities use their not for profit status (not talking about CUNY) but NYU, Cooper Union, SVA, The New School, NY Law, Columbia U. as real estate magnates illegally busting through zoning as NYU, NY Law and Cooper Union have done as well as shocking shameful real estate deals so any moves have to stop destroying the communities and recognizing they have to respect us and if they can first hand join us in empowerment and preservation of the community. (NY Law law dorm reminds me of Mike Red Square Rosen’s hideous Red Square with Lenin on top zone buster protype for mega dorms).

Bloomberg is a fraud as CityTime, ECTP, NYCAPS, countless of corrupt Board of Ed deals have shown.

Years ago I confronted Bloomberg on the John Gambling show and I did demand community outreach resource centers in every dorm where NYU used the term community facility.

I remember Bloomberg’s response to my criticisms were just a few people feel the way Suzannah feels and I was able to prove to him election night he was wrong for almost no money while he is alleged to have used 150 million according to Fred Siegel. http://www.commentarymagazine.com/article/the-bloomberg-bubble-bursts/

The strategy of the 1 percenters is too push Christine Quinn, Mike’s mini-me in to office so she and Bloomberg have been playing good cop bad cop but the Voter Anger towards Quinn is staggeringly high -- way higher than it was for Bloomberg at this time -- a year away from the mayoral election 2013.