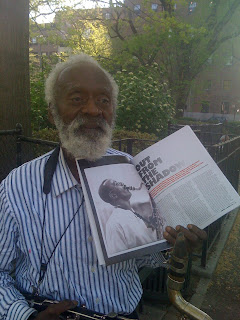 Dear Readers:  I am exhausted...get these fits of exhaustion, started last year when I had to move under duress, total trauma not healed...but one miracle....Last December I filmed Giuseppe Logan playing Begin the Beguine and it rocked the jazz world because people thought he was dead.  Giuseppe was in Virgina when a friend showed him that this was so on a computer and that gave him the drive to get to NYC where like magnets we found each other on a freezing cold day.  Tim Madison, a writer and music lover immediately contacted me to explain the significance of my youtube and how deeply moved he was.
Tim told me because of this renewed interest he has heard that GL's old label is going to re-release his albums maybe with some other tracks.   The article that Peter Gershon wrote is powerful and moving along with the photos of GL as a young man and all the people I have met or emailed along the way are soulful and moving especially Matt Lavelle who has dedicated loving energy Giuseppe Logan's way even giving him this instrument you see in the photo in need of repair.
http://www.signaltonoisemagazine.org/currentissue.html
http://www.myspace.com/mattlavelle
http://blog.wfmu.org/freeform/2009/01/lost-and-blessedly-found-giuseppi-logan.html
I am not going to see The Solist right now -- I remember after Sept. 11 -- it was impossible to sit through a film and after the traumatic experience last year so traumatic but not 9-11, I sometimes feel this way -- the way I do now -- there is no way I can sit through The Solist but I love this magical New York experience and Giuseppe Logan tells me how generous New Yorkers have been to him.
There are people that call themselves real east villagers and they robbed me of my good feeling about the EV but Giuseppe Logan who lived here in the 1960's standing just a few feet from my hexagon in the park "miss you, miss the trees, the NYC idiosyncrasies" from The Going a short story I wrote about 9-11 dedicated to the NYPD detectives -- GL restored some of the feel good and love -- it was as if he and are ghosts revisiting this park compelled to return over and over and that is a theme of two short stories of mine -- the other is Murderville in the East Village -- a political statement about the murder of "the Village -- the community crushing development" but it is told through a modern day version of Laura so I was shocked when Giuseppe played the theme from Laura this morning in the park.  I asked him if he had seen the film and he said no.
Haunting...and my ghost stories are haunting statements -- my art about the neighborhood I loved so much...that I do not recognize anymore....
GL's story is a mystery.  He repeats often he did some things wrong -- bad choices -- in his quiet way.  I nod when he tells and I express compassion.  He is alive and that is a miracle, he now has instruments since he returned to NYC and he has connected with a world wide audience that thought he was dead and are happy he is alive and GL seems happy, very happy to be found.
I am too tired write now to post all my youtubes.  I will start with one but you can find youtubes on GL including the original one from the 1960's in Tompkins that Pete Gershon talks about in his article Out from the shadow.   I remember telling Tim Madison -- Tim I found this video from the 1960's!  Same park, do you think that is GL's son...he is holding his son's hand in a tight loving embrace!  I have made a series and will put up more footage today and Matt Lavelle has some moving video of him and GL playing with other talented artists that clearly love GL and have embraced him.
I feel heart broken about what happen to my beloved neighborhood.  I loved in the Village non-stop for 25 years, much has left me feeling angry and sad and the 2 ghost stories have even greater significance considering what I went through and also the hexagon from The Going being a couple of feet from GL and me when "I found him" as if he was a ghost and I returning to haunt Tompkins....The love and out pouring for Giuseppe Logan and the kindness I felt from Tim Madison and Peter Gershon and their acknowledgement of me as well has been salve on a bigger wound....I am sure GL could relate in some way...
http://www.youtube.com/watch?v=UTssjT9rAmQ

Suzannah B. Troy's blogs have moved & watch Mayor Bloomberg King of New York Part 2 where she finds her inner Mae West to lampoon the mayor!

Memory just came to me, Mike Bloomberg's ad people used my legs and hand painted sign "thanks & gratitude" for his first campaign. NYPD is that theft?

*Memory just came to me -- when Mike Bloomberg was running for his first term his ad people used my legs -- I was wearing shorts and holding a sign "Thanks and gratitude" . Even though they did not use my face people recognized my legs and told me they saw me on tv. How ironic since if Mike Bloomberg had just hinted he had a tsunami of community crushing development in mind, I would have never voted for him and asked him to cease and desist using my legs and hand painted sign.
I was sent the link below and I do not do drugs or have ever used them but this video makes you wonder if someone dropped some mind altering substance in to your computer screen....scary...
Whom ever conceived of this video must agree with me that the Bloomberg campaign is Orwellian and that Mike Bloomberg is in love or addicted to positions of power, any position....
When you see the Mike Bloomberg ads projected on city buildings it just evoked pain because I have to worry about the NYPD giving me summons or what some might call harassment although so far so good. I spoke with sanitation and I feel confident I should not have a problem with the sanitation dept.
On the other hand my friend David Kaufman who wrote the new bio on Doris Day said my no third term poster was so good the mayor may have me bumped off...so after seeing this video starring Mike himself, I felt relief, at worst maybe just harassed,oops I mean visited by his special unit NYPD for the mayor that stops and hands out their business card to any perceived threats like the granny article in The New York post, at worst....I know I need to embrace any tickets, problems that may happen although I prefer they don't happen but I have to convince myself it just means publicity and the kind Mike has been getting is minus 3 million dollars of the 8 million that may go up to a billion.....
http://link.brightcove.com/services/player/bcpid769549532?bctid=20242265001
http://www.youtube.com/watch?v=Mtkbr3ejEwc